Sinusitis is inflammation of the sinuses that occurs due to a viral, bacterial or fungal infection
The sinuses are small, air-filled spaces inside the cheekbones and forehead, around the nose. They mucus produced by them drains into the nose through small channels
The cheekbone (maxillary) sinuses are the most commonly affected 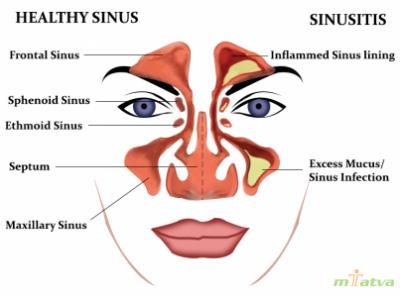 Sinusitis takes about two-and-a-half weeks to clear, so it lasts longer than the common cold. Most people recover completely when treated with antibiotics

Diagnosis is done by physical examination of the symptoms like

Q1.  What is Sinusitis?
Sinusitis is the inflammation of the Para-nasal sinuses of the facial bones by bacteria or viruses.  It is associated with watery eyes, running nose, tenderness over the sinuses, post nasal drip, dry cough and fever.

Q2.  How do I get Sinusitis?
If you are exposed to cold weather and inhale bacteria or viruses, they can get into the sinuses via inhaled air and cause infection.  It also spreads from person to person through inhaled aerosols. You are more likely to get sinusitis if you have structural abnormalities of the nasal bone.

Q3.  What is the treatment for Sinusitis?
Sinusitis is managed conservatively with anti-allergic, decongestants, steam inhalation.  Antibiotics are prescribed if bacterial infection is suspected.

Q4.  How long does it take to cure?
Simple acute sinusitis resolves within a week time of symptomatic treatment.

Q5.  How do I prevent Sinusitis?
You can prevent sinusitis by avoiding exposure to cold and dust. Do steam inhalation as advised frequently if you are prone to getting sinusitis.  Correct any severe anatomical abnormalities of the nasal bone.

Q6.  What are the complications of Sinusitis?
Sinusitis if gets prolonged and recurrent may become difficult to treat and would require surgical intervention to clear congestion in the sinuses

One thought on “Sinusitis: Meaning, Diagnosis and Overview”