What is Motion Sickness?

Motion sickness is a general term for an unpleasant combination of symptoms, such as dizziness, nausea and vomiting, that can occur when you are travelling. It is a very common disturbance of the inner ear that is caused by repeated motion such as from the swell of the sea, the movement of a car, the motion of a plane in air, etc. Children from 5 to 12 years old, women, and the elderly seem to be more susceptible to motion sickness. It is also known as travel sickness, sea sickness, air sickness, car sickness. 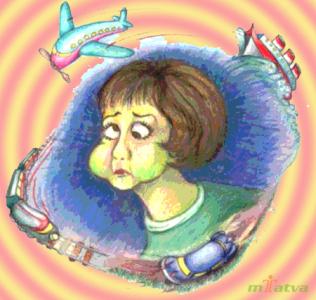 
Q1.  What causes motion sickness?
Motion sickness occurs when the inner ear, the eyes, and other areas of the body that detect motion send unexpected or conflicting messages to the brain. One part of your balance-sensing system (your inner ear, vision, and sensory nerves that help you keep your balance) may sense that your body is moving, while the other parts do not sense motion. For example, if you are in the cabin of a moving ship, your inner ear may sense the motion of big waves, but your eyes do not see any movement. This leads to a conflict between the senses and results in motion sickness.

Q2.  How are anti-emetic medications helpful in motion sickness?
The most commonly used anti-emetic agents act on sites in the central nervous system, by suppressing CTZ in brain considered responsible for vomiting. Antihistamines such as meclizine and dimenhydrinate and anticholinergic drugs like scopolamine act on labyrinthine pathways and are useful in motion sickness and inner ear disorders.