Dengue fever begins with a sudden high fever, often as high as 104 – 105 degrees Fahrenheit, 4 to 7 days after the infection. Skin rash appears over most of the body 2 to 5 days after the fever.
Other symptoms include
If the symptoms become more severe it is called dengue hemorrhagic fever characterized by blotchy rash, abnormal bleeding, and ultimately shock and organ failure. Dengue Shock Syndrome is the most severe form which usually occurs in children having a re-infection. 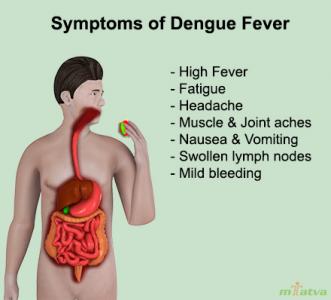 It is caused by four different but related viruses. It is spread by the bite of mosquitoes, most commonly the mosquito Aedes aegypti, which is found in tropic and subtropic regions.