What is Anxiety Disorder?

Anxiety is a term which is to describe different forms of a type of common mental disorder. It is characterised by excessive worrying, uneasiness, and fear about future uncertainties either based on real thoughts or imagination affects both physical and psychological health. Anxiety happens as a normal part of life. Anxiety can become abnormal if it interferes with your day-to-day activities. About 1 in 20 people have an anxiety disorder at any one time. There are various conditions (disorders) where anxiety is a main symptom. 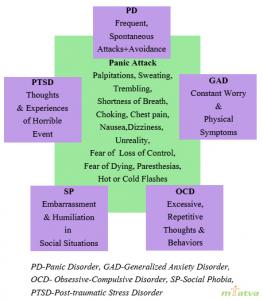 Q1.  Do Anxiety Disorders Co-Exist with Other Physical or Mental Disorders?
It is common for an anxiety disorder to accompany depression, eating disorders, substance abuse, or another anxiety disorder. Anxiety disorders can also co-exist with illnesses such as cancer or heart disease.In such instances, the accompanying disorders will also need to be treated. Before beginning any treatment, however, it is important to have a thorough medical examination to rule out other possible causes of symptoms.


Q2.  Is anxiety life threatening?
The physical symptoms of an anxiety or panic attack, such as rapid breathing, chest pains and pins and needles are very similar to those of a heart attack, therefore it is not unusual for people experiencing such an attack to convince themselves that they are about to die. This is not the case. Nobody has died of a panic attack. It is simply the body reacting to increased adrenalin caused by panic. Anxiety is not life threatening. It is unpleasant, but not harmful.

Q3.  What is the difference between panic and anxiety?
Panic is a sudden intense response to normal thoughts or sensations. This is often accompanied with a feeling of impending doom, and physical symptoms, such as increased heart rate, palpitations, pins and needles.
Anxiety is more of a psychological condition, prolonged by thought processes and rituals which cause the person affected to avoid certain situations which, they believe, will exacerbate their anxiety, and this avoidance behavior then affects their quality of their life


Q4.  Are There Magnesium Side Effects?
Magnesium is a natural mineral, which makes it generally safe to take. If you stick to the recommended dosage of 400 mg per day for adults, it s unlikely that you will have any side effects from taking a magnesium supplement. However, you should not exceed this recommended dosage.
One minor side effect from taking too much of a magnesium vitamin is diarrhea; allergic reactions rash; itching black, tarry stools; nausea; slow reflexes; vomit that looks like coffee grounds.
Although side effects are uncommon, you should keep them in mind before deciding to up your daily dosage of magnesium.
Magnesium may not decrease all of a person s depression and anxiety, but if taken regularly and sensibly, it can very possibly make a world of difference for those going through so much pain.